It all started with one truck, an old 1974 International cabover. In 1981, Charlie Billman (father) and Jerome C. Billman (son) each bought half on a 1974 International. After 9 months, Jerome bought his father’s half of the truck. In the late 1980s Jerome bought a few more units to grow his fleet. In 1995 his dream became reality. He broke out and Billman Trucking Inc. emerged. Currently, the company stands strong with 30-35 trucks and 60-70 trailers. 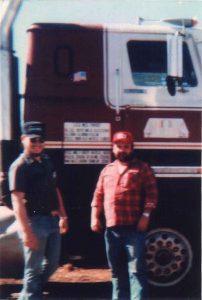 It’s a great place to work, great boss and office staff. Best company I have ever worked for. Dispatchers always try to work with your schedule.

You don’t have to worry about getting cheated on pay, and the equipment is in good condition. They run you really good. Everyone here is more understanding. The stuff we haul is really easy, one pickup and drop. If you want a good living, good equipment, and good easy people to work with, work for the Billman team.

There are quite a few things I like about working for Billman Trucking Inc. One of the things I like most is that the owner, Jerome, is out here a lot doing the same things we do. When you have a problem or an issue, he knows first-hand what you are up against. If there is anything he can do to help, he will.

Everyone in the company has been very helpful, and the equipment is in tip top condition. If you have a problem or questions they are right there to help.

As the new guy, I found friendly knowledgeable people to work with, realistic delivery schedules, and good pay.